Graphic. In 1971 he graduated from the Academy of Fine Arts masters were Alexander Wedge, Barcsay Jenő Fónyi and Geza. Since 1968 participates in exhibitions both at home (Vigadó Gallery, National Gallery, Art Gallery, Hódmezővásárhely, Szombathely, Miskolc) and abroad (Vienna, Warsaw, Prague). He visited several countries in Europe, the most significant of these was the way to Ireland. In addition to the graphics you can create tusrajzokat scoring technique. Modern literature major role in his works, made numerous illustrations, among other James Joyce, Szentkuthy Miklós and others works. Drawings, writings regularly communicate newspapers and magazines. His work has been rewarded with several awards: Derkovits Scholarship (1972), Munkácsy Prize (1977), Artist of Merit (1986) and since 1993 a member of the Széchenyi Academy of Literature and Art. 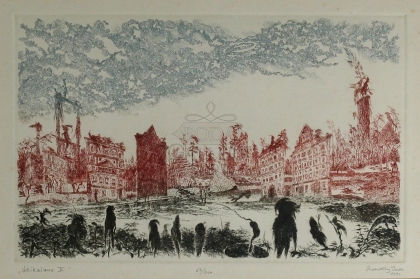