At the College of Fine Arts, where Géza Fónyi, Jenő Barcsay, Endre Domanovszky, Margit Gréber and George Raykai were his teachers, finished his studies in 1958, and shortly thereafter he received the three-year Derkovits scholarship for the most talented young artists. In the second half of the sixties he joined the Nine Artists Group for a short time and participated in their joint exhibitions. In 1969 he was awarded the Munkácsy Prize for his art, and then in 1970 he organized his first large collection of collections at the Ernst Museum in Budapest. In 1976 he entered the Műcsarnok with an independent exhibition for the audience, whose material was presented at Kecskemét, Szeged and Vác. This year he will present his works at the Damjanich Museum in Szolnok in the Estonian capital, Tallinn. In the Szolnok Gallery and at the Műcsarnok in Győr in 1977, an exhibition of his works was organized. In the same year, a Merited Artist honors his creative career. His exhibitions proved to be memorable in the exhibitions in Tihany, Germany in 1984, in Germany. In 1987 the Ernst Museum again organized a collection of works from its works. He acknowledges the appreciation and appreciation of the audience that he won the prize three times at the Szolnok Festivals Triennial and in 1996 in Hódmezővásárhely. His creativity and the richness of his art is proved by his sgraffit in Rego, Sátoraljaújhely, Jánoshalm and Tiszaeszlár. In Nagykőrös and Borsodnádas ceramic mosaic, Bajara made murano mosaic, Bácsalmás is remembered with marble mosaic. Several designs of the tapestry were achieved. Angyalföldi Szabó Zoltán was the original creative artist who was responsible for sharing experiences and ideas with others. He was still a child of the horrors of World War II, and he was accompanied by the depiction of experienced suffering throughout his career. His Bible-related figures show the search for mankind, reminding the viewer that we are all together, our fate and each other\'s responsibility are inseparable from each other. 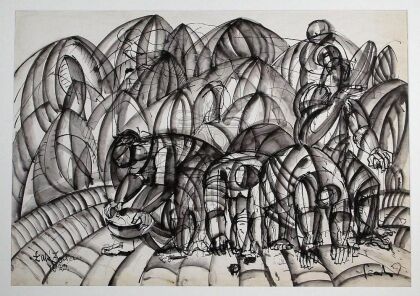 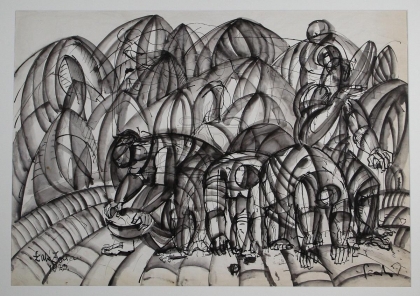