Painter. He studied at the College of Fine Arts, his masters were Rezső Burghardt, István Szőnyi and Ágost Benkhard, later Jenő Elekfy became his assistant. He studied in several European countries, Switzerland and Finland, among others. Director of the Puppet Theatre. Since 1955 he has participated in exhibitions in Hungary (Adolf Fényes Hall, Budapest, Szeged) and abroad (Finland, Germany, Birmingham, Los Angeles). After that he returned to painting. He was a founding member and the first president of the Mednyánszy Society and the DunapArt Art Association. 1972: prize of the Egri Watercolour Biennale, 1987: Nívódífe; 1982: Miklós Káplár Prize; 1990: Pro Arte Budapest Prize. Since 1967, he has been working in Venice in the summer and organizing exhibitions at the Chapel Gallery. In addition to still lifes and life paintings, he mainly paints landscapes. He lived and worked in Budapest. Holder of numerous awards. Works in the National Gallery, Szolnok He was born on 26 August 1920 in Karcag. His father was a teacher, Lajos Bod. He completed his primary and secondary education in Karcag. Already in the upper grades of the grammar school, his drawing skills were noticeable. Sándor Tőkés taught him drawing in high school. He graduated from high school in 1938. Between 1938 and 1944 he was a student at the College of Fine Arts. From his second and third years at the college, he regularly attended the Soli Deo Gloria lectures. During the summers he worked in art camps. For three summers he painted in Miskolc, mainly landscapes. He spent the summer of 1942 at the art camp in Nagybánya. In 1943 he received a scholarship to Szeklerland. In the summer of 1944 he and several other artists set up an artists' camp in Felsőbalog, near Rimaszombat. At the end of September 1944 he returned to Budapest, where he became an assistant lecturer at the college. As a scholarship holder he went to study at István Rév's puppet theatre. He also enrolled at the university, studying cultural history and ethnography. In October 1944 he was taken into the army. He joined the war correspondents. In 1945 he was captured by the Americans in Austria. Later that year, the American soldiers asked him to teach at an art school in Linz. This school was attended by soldiers who had dropped out of their studies because of military service. On 21 October 1945, he married Adrienne Bartus in Linz. They both returned to Hungary in 1946. They went to Miskolc, where László Bod took up a teaching post at the Tóth Pál Institute. Besides drawing, he also taught English. In the meantime, he also worked at the free art school founded by Sándor Várady. At that time the people's colleges were beginning to be organised. László Bod became the director of one of these colleges. During the one and a half years he ran the folk college, he created a puppet theatre for his students. They took notice of his work and invited him to lecture at the Ministry of Religion and Public Education in 1948. He had to deal with puppetry issues, organise courses and manage the affairs of the art schools. He worked there for a year. In 1949 he was appointed director of the State Puppet Theatre. In 1954 his contract with the puppet theatre was not renewed. In 1954 he became a member of the István Csók Creative Community. It was with this group that he exhibited his works for the first time in Budapest in 1955. His next exhibition was in November 1955 at the group exhibition "Six Painters, Two Sculptors". In 1958 he took part in a study trip to Finland. From 1960 onwards, he had regular exhibitions in his home country. In 1962, he again went on a study trip to Westphalia, courtesy of Günther Lohmann. In 1972 he went on an artistic trip to Switzerland and then to Italy. In 1980 he also went to India on a scholarship and study trip. In 1988 he had an exhibition in the USA. He died on 14 August 2001 in Budapest. His funeral took place on 28 August 2001 in the Farkasréti cemetery in Budapest. 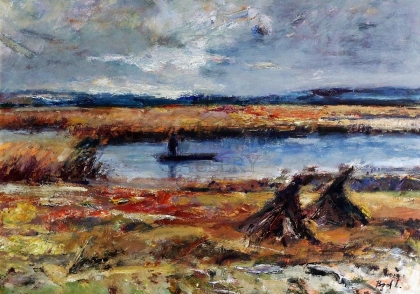 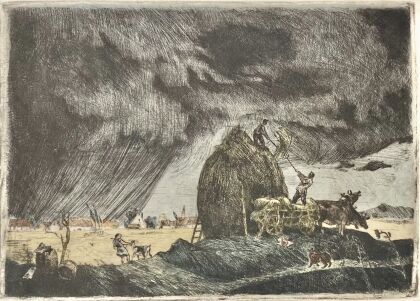 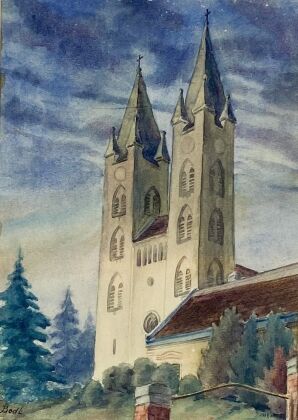 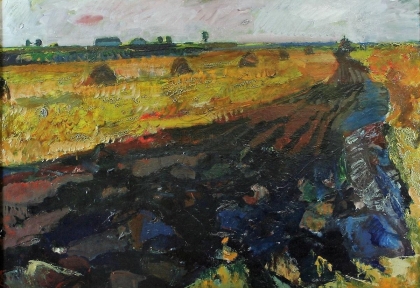