Painter. First, father, Andor G. Horvath studied painting artist, then became the Hungarian Academy of Fine Arts Rudnay Gyula Kiss and Istvan student of 1922. In 1924 he visited France in 1927, Germany and Northern Italy. In 1928 and 1931 he was awarded the State Prize of pastel and the Hungarian Watercolor and Pastel Painters Association Award and in 1930, the Lake Landscape Award. In 1941 he was awarded the Royal Society of Fine Arts and the Hungarian Artists bronzérmével George\'s County Association of coins. He received a state scholarship to Transylvania. He was a member of the Hungarian Artists\' Association, the National Salon of Bertalan Székely Society and the Society of Fine Arts. From 1929 he worked as an art teacher. 1924 was the first to the Art Gallery, which featured material collected in 1939 as well, and after 1945 also constantly participated in exhibitions. Abroad he featured in Vienna, Germany and Italy, Yugoslavia. Her works are preserved in the National Gallery. 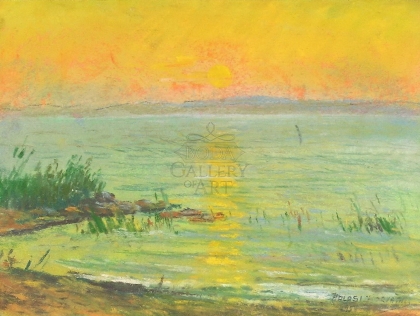