Béla Stettner Budapest, 1928-1984, Budapest Graphic artist, sculptor. He graduated from the Academy of Fine Arts in 1952, his teachers were Róbert Berény, János Kmetty and Károly Koffán. For three years from 1960, Derkovits received a scholarship and went on study trips to several countries. He had individual exhibitions in the capital (Műcsarnok), in the countryside and abroad (Vienna), but also participated in group exhibitions (Berlin, Tokyo, Paris). He participated in the work of several art groups. He preferred linocuts, etchings, and monotypes, but his ex libris were also significant. His work was awarded with several awards (Munkácsy Award 1966, Merited Artist 1972). 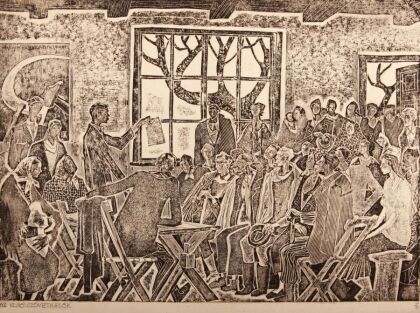