The idolatrous Huba (Budapest, June 7, 1938 – Budapest, August 12, 2011) Between 1956 and 1962, he studied at the Hungarian Academy of Fine Arts, where his teachers were Sándor Ék, Gyula Pap, Károly Raszler, and István Szőnyi. From 1963 to 1972, he taught representational geometry in the same place. Since 1977, he has been a lecturer at the Teacher Training College in Budapest, and since 1989 he has been the head of the Department of Visual Education. He has published numerous publications on the topic of visual education. Most of his figurative works are lithography, mixed media drawing and graphics. He also created large-scale murals, a school memorial wall and bronze portrait reliefs. Thematic and/or genre folders were published from his linocuts and graphics. He also made book illustrations. He presented his graphics in solo and group exhibitions at home and abroad, and between 1968 and 1987, his works were included in almost all exhibitions of Hungarian graphic artists abroad. Many public collections preserve his works, including the Hungarian National Gallery (Budapest), the Déri Museum (Debrecen), the Herman Ottó Museum (Miskolc), the Janus Pannonius Museum (Pécs), the Miskolc Gallery, the Mihály Munkály Museum (Békéscsaba), the Pushkin Museum (Moscow), Sárospataki Picture Gallery. In 1980-81, he participated in the work of the Makó Artist Colony. Between 1986 and 1990, he was the vice-president of the Association of Hungarian Artists and Industrial Artists (MKISZ). He was the founding president of the Visual Education College of the Teacher Training College. He has excellent students, including the ceramic artist Anna Erdős. 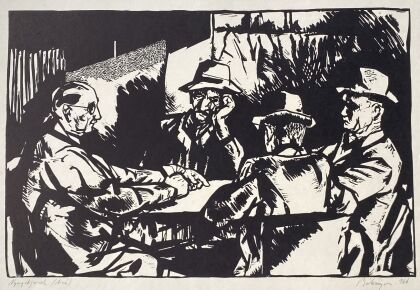