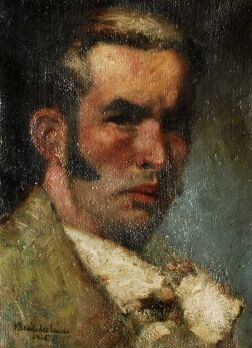 In the years around the First World War the family lived in Vágújhely in the Highlands, which came under Czech rule after the events of Trianon. Sándor and his brother Barna fled from there to Pest to begin their artistic studies. Sándor Basilides was a student of Ede Balló and later Gyula Rudnay at the Academy of Fine Arts. In 1925 he and his brother went on a study trip to Italy. Initially he followed the style of his masters, but soon found his own individual voice, themes and expressions. The socially sensitive artist often painted everyday life in post-war Hungary. "My aim in my work is to give back the joy and pain of Man: to perceive the human Beauty, to live out the moods of nature", reads his creed in an article published in 1927. The artist, who also qualified as a teacher at the Academy, first became an assistant teacher under his master Rudnay and then a teacher at the School of Industrial Drawing in Budapest, now the School of Fine and Applied Arts. Until his retirement in 1968, he was a highly respected and renowned teacher at the school. His paintings of the 1930s are characterised by lighter, brighter colours and solid outlines. The joys of family life and the tranquillity of the Balatonalmád summer cottage are reflected in his works, as is the oppressive mood of the approaching war in the 1940s. This can be seen for the first time in his paintings of the 'winey' Balaton. Writes his monographer Péter N. Horváth. In the 1940s, the Vörösberény Teachers' Artists' Association was founded, of which he became an active member. His name is associated not only with paintings, but also with graphics, poster designs, illustrations and tapestry prints.