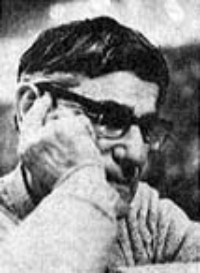 He studied sculpture with József Róna and painting with Gusztáv Magyar Mannheimer. He spent a year at the Hungarian Academy of Fine Arts. 1932: Austrian State Silver Medal; 1974, 1984: Gold Degree of the Order of Merit of Labour; 1987: Merited Artist. In the 1920s he lived in Yugoslavia, Italy and Munich. He returned home in 1928. From 1945 to 1947 he was head of the painting school in Nagymaros. He worked at the art centre in Zsennye. At the beginning of his career, he was an acclaimed portrait painter who received many commissions. Between 1933 and 1935 he created the Light City cycle, in which he painted gigantic, utopian cities surrounded by light. From 1945 to 1947, he painted the series Mr Robin and his troupe in Nagymaros, evoking the world of the circus and the fairground. From 1948, he painted a brief period of birds and idyllic scenes, followed by figurative works until the end of the 1950s, which led to the non-figurative paintings of the 1960s.