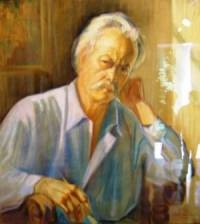 He learned the basics of painting from his father. 1927-31: Hungarian College of Fine Arts, diploma in drawing, master: Gyula Rudnay. 1931: Roman Fellow. He has been exhibiting his works since 1930. He has participated in several international and domestic exhibitions (Art Gallery, National Salon, Erst Museum, New Salon, etc.). He painted al secco murals and made works using sgraphito technique. He also patterned reliefs. Among his paintings - in addition to those made with watercolor, tempera and oil - we find the largest number of works made with pastels. In his popular genre, he made intimate interiors and portraits with great care. The Éber family of artists (Sándor Éber Sr., Sándor Éber Jr., Anna Éber) is an artist109.