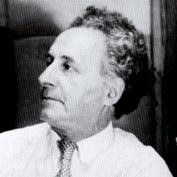 During his childhood he studied with László Mednyánszky, later at the Free School of Nagybánya he was a student of Ferenczy Károly. Alfred Réth's oeuvre, after the brief mines in the Upper Bavaria, unfolded in France. From 1905 he lived and studied in Paris, where he had a good relationship with the Galimberti couple and István Farkas. From 1910 he was one of the first Cubist aspirations and collage technique. Between 1910 and 1912 he attended the Salon d'Indépendants and Salon d'Automne. In 1912 Budapest published with Légers, Metzinger and Kandinsky. In 1913 he held a solo exhibition at the Sturm Gallery in Berlin. After the First World War, he joined the École de Paris, then international abstract trends: in 1933 he became a member of the Abstraction-Création group. In 1950 he exhibited French art at Paris and Copenhagen and in 1953 at the Musée d'Art Moderne "Le Cubisme" at Paris. He died in his Montparnasse studio in 1966. His creations were made at the Jannus Pannonius Museum in Paris in Paris and They are located in Geneva.