Born in Cluj-Napoca in 1874, the painter began his art studies at the Berlin Academy of Painting after graduating from the local high school. From there he traveled to Paris, where he trained as a student of the world-famous Benjamin Constant and Jean Paul Laurens at the Julian Academy. After his student years, he traveled to England, the Netherlands, and Belgium, and after returning home in 1900, he continued to work at the master school of Károly Lotz in Budapest. In the years following the turn of the century, he achieved one success after another: he regularly participated in exhibitions at the Art Gallery, won prizes, and was then repeatedly asked to perform monumental tasks. His mural works in the church in Móri, in the domes of the arcaded tomb of Kerepesi cemetery, in the restaurant of the Opera House, in the Eger Cathedral and in the parish church in Nyíregyháza still advertise his outstanding technical skills. From 1920, he gained fame as a teacher at the National Hungarian School of Applied Arts and as the creator of the first Hungarian art anatomy book. Gábor Stein János is the continuation of the best traditions of nobly conservative, academic painting, he stands in the line at the head of which the great bravura painters, Gyula Benczúr or Fülöp László, take their place. The "virtuoso hand", the amazing technique, the perfectly polished composition and the sensuous surface design are all outstanding virtues. Painter, graphic artist. He continued his studies in Berlin, Munich, Paris and Budapest. For a time he lived in Cluj, which produced portraits and illustrations. painted murals, some of which can be found in the Parliament and also more church (Nyíregyháza, Eger). it had a big impact Lotz Károly, who has worked since 1899 in addition. He taught at the College of Applied Arts and Artistic anatomy book published in 1905 entitled. A picture in the National Gallery. 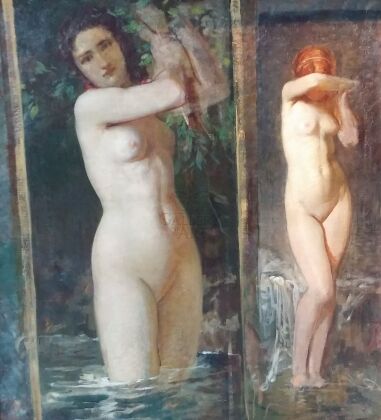