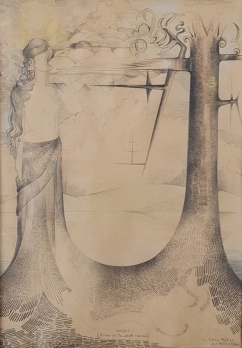 The special figurative art of Béla László Urbán (1938-2012), unfolding from a dense, colorful network of lines, his style approaching reality towards surreality hides an artist who interpreted the world through his own subject and combined it with this unique form of artistic expression. His career and work remained unknown and hidden. Due to his rejection of the political and social system of the era, he came into conflict with the apparatus of power that strongly controlled and influenced cultural politics on several occasions. As a result, his art and person were among the latter in the dogmatic world of the socialist system of ideas, a new practice that emerged in cultural politics from the 1960s onwards, in the three-category category of support-tolerance-tilt. With this, his life and work came to the margins of society, he could only present himself in a few solo and group exhibitions, rather organized towards the end of his life. And although it was rehabilitated in the late 20th century, after the regime change, this did not happen to the artist.